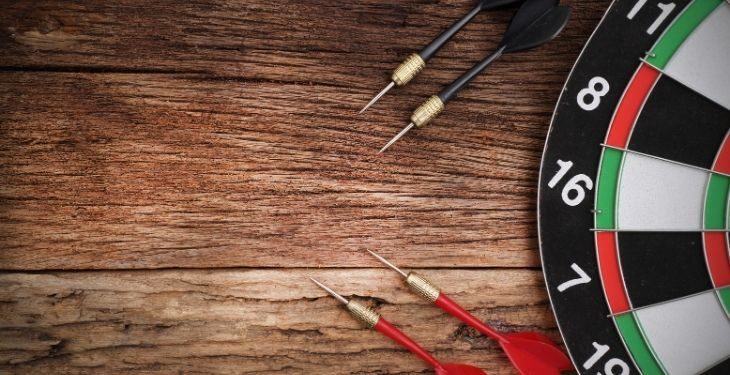 A dart game is generally played between two people, with each person throwing three darts per turn, at a circular dartboard. Although it started as a pub game, it has now gained popularity among the masses across the world. In a dart game, points can be obtained by hitting specific areas of the board, which are randomly located.

The objective of most games would be to reduce the score to zero. A single game in a dart game match is called a leg. Most matches are divided into sets of legs. The different types of dart games and common terms used in the games are described below.

Bullseye: The centre of the dartboard is called a bullseye. It has two sections: the outer bull with a score of 25 and the inner bull of score 50.
Double: The outer ring of the board. In standard #01 games, this counts for twice the number.
Doubling In: Score a double to win the game.
Doubling Out: Score a double to end the game.
Single bull: Hit on the outermost ring of the bullseye.
Ton: A score of 100.
Triple/Treble: The inner ring of the board. It is thrice the number hit.

Darts can be played in a variety of games with different rules and regulations. These can be discussed as follows:

The #01 games refer to the standard 1001, 701, 501, 301 games. These are very popular among competitive players and the rules of these games are simple to follow. The rules can vary based on the league. While the 701 and 1001 are played in teams, the 301 and 501 are played by individual players.
A toss of the coin determines the order of the play.

This can also be done by a player throwing for the centre bull. Once the order of play is finalized, the winner will start with the first leg. The looser will start with the second leg. A throw consists of three darts. The aim is to reduce the given score 1001, 701, 501, or 301 to zero, as previously agreed upon by the players.

This basic and easy game is played between two players, throwing three darts each per turn. The objective of the game is to hit every number on the board in order. The player cannot proceed until the next number is hit.

Baseball is played between two people or two teams on a standard London Clock dartboard. The winner of the game is the player/team that has the highest score at the end of the game. The score is calculated by adding the points for each innings of each team.

For e.g, if the player hits a 3 in the 1st inning, the score is not calculated. A running total is kept for the game. If there is a tie at the end of the 9th inning, extra innings are played with bullseyes as the target.

This is a fast game played among two or more people. The players use three darts each and aim to hit the treble segments on the dartboard. The segments are from 10 to 20 to the outer bull and then the centre bull. The hits must be sequential. The first player to hit all twelve scoring areas becomes the winner.

Cricket is played among two teams or two individual players, and it’s played on a standard dartboard. The players throw three darts per turn.
This game is played using 15, 16, 17, 18, 19, 20, and the inner bull and the outer bull. The game is to “close” these numbers and to obtain the highest score. To “close” an inning, a player must hit a number three times. This can be done by hitting three singles, a single and a double, or a triple.

Once a player accomplishes this, that particular number is owned by that player until the opposing player “closes” it. After this, this number can’t be used for scoring by either team. After a player “owns” a number, the double ring counts as 2, and the triple ring counts as 3. The player or team with the maximum points and with all innings closed will be the winner.

The game of hare and hound is played between two players with three darts each. One player will be decided to be the hare by a coin toss and the other player automatically becomes the hound. The objective of the game is for the hound to catch up to the hare. The hare will be playing clockwise, starting at 20 and the hare has to return to 20 without the hound catching up. The hound aims at overtaking the hare.

This is an advanced game played among two or more players. They take turns throwing three darts each at previously decided targets on the dartboard. The selections might include any single number, any double, number sequence, inner bull, outer bull, etc.

So, to summarize, the players throw three darts each, at a previously decided sequence of targets. Each player shoots their dart beginning with the first number in the sequence. If the player scores, it adds to their points. If he misses it, the point balance gets halved. The player with the highest score wins.

This fun game can be played with any number of players. The more, the merrier. The players throw three darts each to score a number divisible by 5. Points are awarded based on the numbers of 5 that can fit into the total score. For e.g, suppose you score 5, 10, 5. The total score is 20. 5 fits 4 times in 20. Hence, 4 is your actual score. The player who scores 51 5’s is the winner.

This easy and fun game is merrier with more number of players. To explain the game in a sentence, the purpose of this game is to strike the number the previous player hit and then set a new number for the next player to hit.
The first player uses their non-dominant hand to throw a dart.

This is called the opening throw. The number that the opening throw strikes becomes the target for the next player. The player is supposed to use the first two darts to hit the target set by the previous player and the last dart to set the new target. If he scores with the first dart, well and good.

If he fails to do this with all the three darts, he loses a life. If the previous target was hit on the third throw, the player gets three chances to set the new target. The winner is the player with lives left on his play.

The different technical games which can be played using darts can be discussed under the following heads:

This game is played by two players with three darts each.
The first player who hits a bullseye proceeds into the game. The player can score a goal by hitting doubles. The winner is the player who scores ten doubles.

Grand National is based on the renowned horse race. It can be played among any number of players with three darts each.
The game aims to circle the dartboard anticlockwise to hit the numbers one after the other. The segments are considered to be hurdles. If the player does not hit the hurdle, they are considered to have fallen at the hurdle and are out of the game. The first player to circle back to 20 wins.

This game is fun when played with 5 or more people throwing three darts each. All the players are given 3-5 lives each.
Each player draws a number from 1-20 and these are recorded. A player gains the title “KILLER” by hitting the double of their number three times. The KILLER tries to hit the opponent’s number doubles, thereby making them lose a life. The winner is the player who is alive after the game.

This game is similar to Killer, but with a small change. In this game, the players do not reveal their numbers. Instead, they take turns throwing doubles at a number of their own choice. If a double is hit, the player with that number loses a life.

The winner is the player left alive at the end of the game.

This game is best played with 2-8 people throwing three darts each. The order of the play is determined by the players throwing a single dart first. Nearest to farthest from the bull determines the order.
The first player tries to score as many points as possible. The player next in line aims to outscore the previous player. If the player fails to do so thrice, the player gets dropped out of the game.
The winner is the last person standing.

This player would be the one who threw the dart nearest to the bullseye. The remaining players must hit the segment exactly. If a player misses, they lose a life. If a player hits the segment, they can use their remaining darts to determine a new segment in play. And the game carries on till there is only one player left alive.

This game can be played among two or more players with three darts each. The order of the play is determined by throwing a bullseye. As I have mentioned before, the person who throws closest to the bullseye goes first, and so on.

The game aims to go around the board, hit the numbers 1-20 in order. If the player misses it, he loses a dart. Once three darts are lost, the player loses a life. Each player gets three lives. The winner is the first person to hit 1-20.

This came is played among 5 people or more with 3 darts each. The order of the play is determined by throwing a bullseye. The game aims to go around the board, clockwise, in order. If the player throws into the area between the bullseye and the triples ring, the dart is left on the board as a “Prisoner”.

This dart is left on the board until any player hits the same area. When this is done, the dart goes to the new player. Now the player has four darts and the player who lost the dart has to play with two. The winner of the game is the player who throws every number from 1-20.

Shanghai can be played between two or more players with three darts each. The order of the play is determined by a coin toss. The object of the game is to hit a single, double, and treble, in any order of the number 1. If none of the players gets this, they move to the number 2 and so on. The first person to achieve these wins. 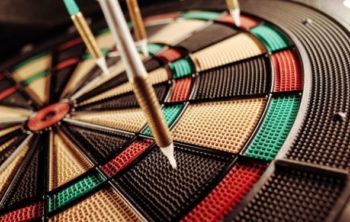 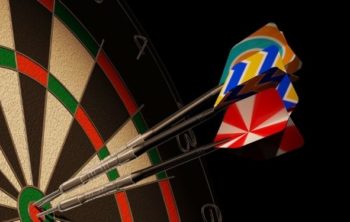 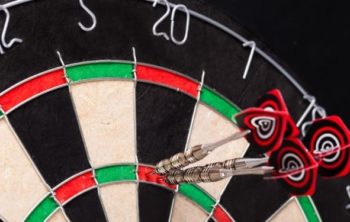