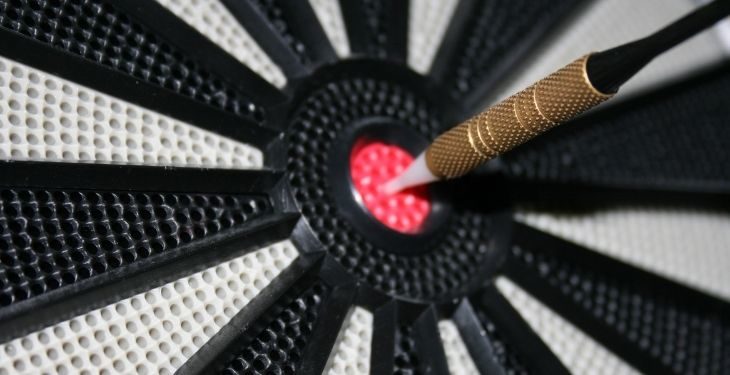 Scoring in a darts game depends on a lot of factors. The game you play, the dartboard you use, the darts you use, your state of mind – all play a role in the score you get during a darts game. Needless to say, you have to understand the darts game that you are playing to strategize and score well.

For that, you need to know the basic rules of the various number of games that can be played on a dartboard. In this article, I have listed the common darts games and their rules. Keep in mind that all these games are played on a standard dartboard. The games and the rules vary based on the dartboard that is being used. in order to understand the various Dartboard Scoring Rules we first need to understand the different terms along with their implied meanings. Let us start!

Bullseye: The centre circle on the dartboard.
Ochie: It is defined as the line behind which a player is supposed to stand when they are throwing darts.
Double-In: Landing a hit on the double segment on the dartboard.
Double-Out: Reducing the score to exactly zero by landing a hit on the double segment.
Straight-In: Landing a hit on any number.
Bust: Landing a hit that gets more points than required to win or reaching zero without landing a double. The turn is forfeited and the points get reverted.
Throwing a bullseye: The players throw at the bullseye. The player who lands a hot closest to the bull goes first. The player who lands a hit the farthest goes last.

The following are the universal rules which should be followed so as to ensure Fairplay. These include:

How to set-up the dartboard

For a darts game, the initial setup of the dartboard plays a crucial role in the play. The World Darts Federation (WDF) has given the standard measurements for a dartboard set-up as :

For most dart games, this is the setup measurement that you need to follow. When practising, you can set the dartboard according to your preferences but it would be better if you practice with the standard measurements as the league matches use these measurements.

Measurements Of A Dartboard

The given diagram is that of a London Clock Dartboard. This is the standard bristle dartboard used in the league matches conducted by the World Darts Federation. There are various other dartboards, which differ based on the material with which they are produced. You can check them out here.
This dartboard is 451 mm in diameter and is split into 20 segments by metal wire. Each segment is marked 1-20 in a predefined order and is coloured black and white alternatively.

For most games, three darts are given to each player. The dart that bounces off the dartboard or does not remain on the board until collected, does not count.

The scoring pattern used for most dart games is given below. Use the image of the dartboard given above for reference. Landing a hit on the black or white-coloured segments will score the point value of that segment. Hitting the thin green or red inner segments that are positioned halfway between the segments will score you triple the point value of that segment. This is called the triple ring.

It is evident that different rules are followed for different Games. Those can be discussed under the following heads:

For the Standard #01 games, the winner is the player who reduces their score to zero from 1001, 701, 501, or 301. The order of the play is determined by throwing a bullseye. The standard games begin with a double-in. You can start the game using a straight-in if it’s agreed upon by all the players.

If the players agree for a double-in, you need to land a throw in the double ring for your points to start reducing. If the game starts with a straight-in, you can throw your darts and try to obtain the maximum points.
If the game is decided to be a straight-out, you can reach zero in any way.

If the game is a double-out, you need to land a double and reach exactly zero to win the game. If your points go below zero, your last throw gets cancelled and your points revert to your previous score. This process is called a bust.

For this game, the player who hits all the segments in the dartboard is declared the winner. The order of the play is determined by throwing a bullseye. You have to hit the segments in the clockwise order. You will not be allowed to proceed until you hit the next number in the sequence.

This game is usually played between two teams and the aim of this game is to bag the highest score. The score is calculated by adding the points for each innings of each team.

If you do not hit the number, the score is not calculated. When a player/team completes 9 rounds or 9 innings, the game is over. The winner is the team/player with the highest score.

This game is played with two or more players. The order of the play is determined by throwing a bullseye. You are supposed to target 10 to 20 and then the outer bull and then the inner bull. The throws must be sequential. If you manage to hit all the twelve targets, you are declared the winner.

Cricket is played between two players/teams using the numbers 15, 16, 17, 18, 19, 20, and the two bulls. If you/your team manages to obtain the highest score and close these numbers, you are declared the winner of the game.
To close an inning, you are supposed to hit the numbers three times. You can either throw three singles, a single and a double, or a triple.

This game is played between two players. You can decide who is going to be the hare using a coin toss. Your opponent automatically becomes the hound.
As the name suggests, the hound aims to catch up to the hare. The hare has to go round the dartboard, starting at 20 and then return to it, without the hound catching him.

This game is played among two or more players. The players take turns throwing at previously decided targets. The selections might include any single number, any double, number sequence, inner bull, outer bull.

You shoot your dart beginning with the first number in the sequence. If you score, it adds to your points. If you miss, the point balance gets halved. The player with the highest score wins.

Any number of people can play this game. In this game, the player who throws fifty-one 5’s is declared the winner. The players throw three darts each.

There are different rules for various technical games as well which can be discussed as follows:

Follow the leader can be played any number of players. The purpose of this game is to strike the number your predecessor hit and then set a new number for the next player to hit. The first player uses their non-dominant hand to throw a dart. This is called the opening throw.

The number that the opening throw strikes becomes the target for the next player. If you do not hit your target, you lose a life. If you hit the target the third throw, you get three chances to set the new target. If you are left alive at the end of the play, you are declared the winner.

This game is played by two players. Hit the bullseye first to proceed into the game. You can score a goal by hitting doubles. The winner is the player who scores ten doubles.

This game can be played among any number of players. The game aims to circle the dartboard anticlockwise to hit the numbers one after the other.
Each player has three darts per turn. If you do not hit the number during your turn, you are out of the game. You have to hit the number at least once to proceed The first player to circle back to 20 wins

This game can be played with five or more people. Each person is given 3-5 lives each. Each player draws a number from 1-20 and these are recorded.
You can gain the title “KILLER” by hitting the double of your number three times. Once you become the killer, try to hit the opponent’s number doubles, thereby making them lose a life.

The winner is the player who is alive after the game
Blind Killer is the same game with a small difference, you are not required to reveal the number you draw. You can hit a double and the player who has drawn that number loses a life. Fun, right!

This game is played with 2-8 people. The order of the play is determined by throwing a bullseye. The first player tries to score as many points as possible. If you are next in line, aim to outscore the previous player. If you fail to do so three times, you get dropped out of the game. The winner is the last person standing.

This game can be played among two or more players.
The order of the play is determined by throwing a bullseye.
The game aims to go around the board, hit the numbers 1-20 in order.
If you miss it, you lose a dart. Once three darts are lost, you lose a life. Each player gets three lives. The winner is the first person to hit 1-20.

This game is played among 5 people or more. The order of the play is determined by throwing a bullseye. The game aims to go around the board, clockwise, in order.

Shanghai can be played between two or more players. The order of the play is determined by a coin toss. The object of the game is to hit a single, double, and treble, in any order of the number 1. If none of the players gets this, they move to the number 2 and so on. The first person to achieve these wins.

I hope this article explained the scoring rules of the dart games. I have tried to be as thorough as possible. Please keep in mind that there are many more games that can be played on a dartboard.
Happy gaming! 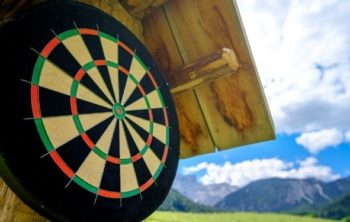 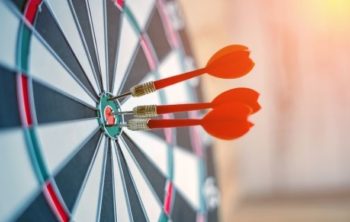 According to the World Dart Federation, the official governing body of the sport, the standard dartboard height measurements …